Home » Logic Bomb: what they are and how to prevent them 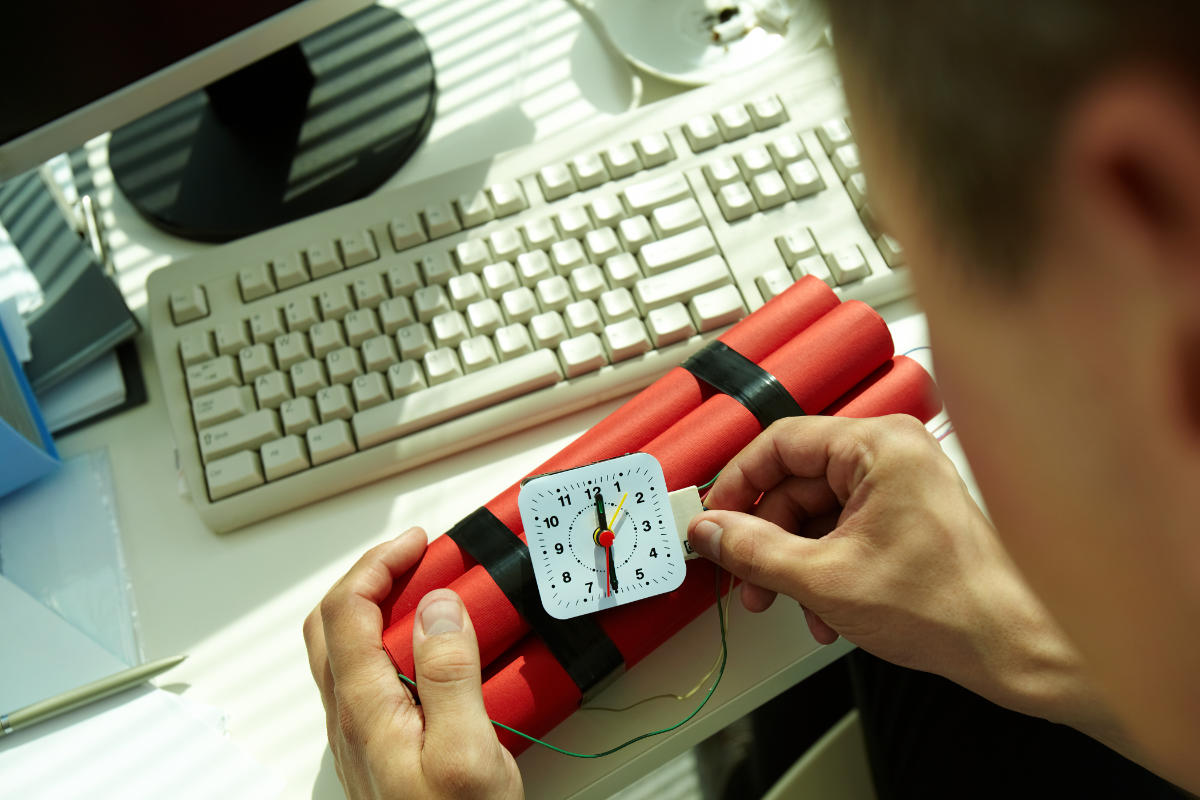 A logic bomb, also called slug code , is a piece of code inserted into an application, virus or malware that implements a malicious function after a certain time limit or under conditions specifications.

These “bombs” are often used via viruses, worms and Trojans to better manage your time and do maximum damage before you are noticed . They perform actions such as corrupting or altering data, reformatting a hard drive, and deleting important files.

In this article I want to explain what a logic bomb is and offer some suggestions for preventing damage.

What is a logic bomb virus?

A logic bomb is often embedded in a virus or otherwise in an executable file. It consists of malicious code that triggers an attack when specific conditions are met. Conditions can be positive (something that happens) or negative (something that doesn’t happen). In the first case an example is that of opening a program, however, an example of a negative condition is a user who does not log in.

Logic bombs are often installed by someone with high level access, such as a sysadmin. Such a person can wreak havoc by setting these codes on multiple systems and programming them to “explode” simultaneously when a certain event occurs. For example, they could trigger when a certain employee is removed from the salary database, ie when he is fired.

The term slag code refers to manipulated code that makes an otherwise safe program malicious. The logic bomb time versions are the most common ones and use the passage of a certain amount of time as a positive condition.

Whatever the name used, the method of attack is clearly the same: the code remains dormant in the infected software until it is triggered . Common attacks involve data corruption, file deletion and hard drive wiping .

How a logic bomb works depends on who designed it. Each logic bomb is unique, which is why they are difficult to track . They are usually customized to be as undetectable as possible. They are often disguised to look like a typical computer virus or embedded in other types of malware such as worms . Worms and viruses are different, but logic bombs don’t care about the distinction – they can cause damage through both.

Is a logic bomb actually malware? Since they are part of other programs, no, but they usually have malicious intent. This is why slag codes are so difficult to detect. Furthermore, being “only” code, potentially insertable anywhere, mitigating the risk is more complicated.

The best thing to do, as an end user who might be involved in a logic bomb attack, is to keep an eye out and ask your company’s IT experts to do the necessary checks if in doubt. The risk is to unintentionally trigger the bomb trying to find it.

Logic bombs can subtly change a snippet of code so that it appears technically normal to an automated threat detection system, while it would appear highly suspicious to the human eye. In 2016, a freelance programmer voluntarily caused a recurring spreadsheet malfunction at a subsidiary of the Siemens company. The subsidiary continued to hire him to solve the problem he had caused himself (Source). In this case, the employees did not suspect anything until a lucky coincidence forced the malicious code to come out.

Even companies can use logic bombs to hack their customers . In 2005, Sony was embroiled in a scandal for releasing CDs that triggered a logic bomb when inserted into a computer. The slag code contained on the CDs installed a rootkit that blocked the PC’s ability to copy CDs. (Source)

Another high-profile case occurred in the early 2000s, when a UBS Global employee, angered by a salary dispute, planted a logic bomb that caused more than $ 3 million worth of damage . A clear sign that a very small code snippet can cause a great deal of damage. (Source)

In 2013, a time bomb attack in South Korea wiped out the hard drives of several banks and broadcasting companies. The group responsible for the attack put the time bomb inside a piece of malware that ended up infecting over 32,000 systems . The bombs all exploded together, causing chaos across the country. (Source)

Where did they come from and how to prevent logic bombs

As we have also seen in the examples, logic bombs are typically distributed within a closed network, such as that of a company or branch. One of the likely sources is a disgruntled employee with administrator access , so careful monitoring of staff outbound activities should reveal any suspicious activity . But that’s not all, logic bombs can also be placed in email attachments and suspicious file downloads , so users should be vigilant when choosing which files to download.

As we saw when we talked about phishing and social engineering , the most hackable part of a system are often the users. This is why a preventive campaign is always an excellent choice. Taking care of the staff also means offering specific training through ethical phishing services.

In addition to prevention, it’s good to limit administrative privileges to a select group of employees so that someone is less likely to cause serious damage to your network with a logic bomb. This preventative method also reduces the number of suspects in the event of an attack, making belonging to that specific group of employees in itself a deterrent against internal attacks.

The solution proposed by SOD

Where prevention fails and hackers win, it is the ideal field for implementing advanced monitoring and analysis systems.

SOD offers, for example, a SIEM system in the SOC as a Service solution. The SIEM constantly collects information on what is happening in the network . This information is then enriched with contextual metadata to standardize and manage it better. Already this is capable of triggering alarms if some suspicious events occur. But if this were not enough, the SOC also has a “ User and Entity Behavior Analysis ” (UEBA) tool that analyzes user behavior and, thanks to the interaction of an AI, is able to identify suspicious behavior. .

If you want to know more about the SOC service we offer, or if you have any questions about how SOD can help you keep your business safe, don’t hesitate to contact us. We will be happy to answer any questions.