Home » Red Team, Blue Team and Purple Team: what are the differences? 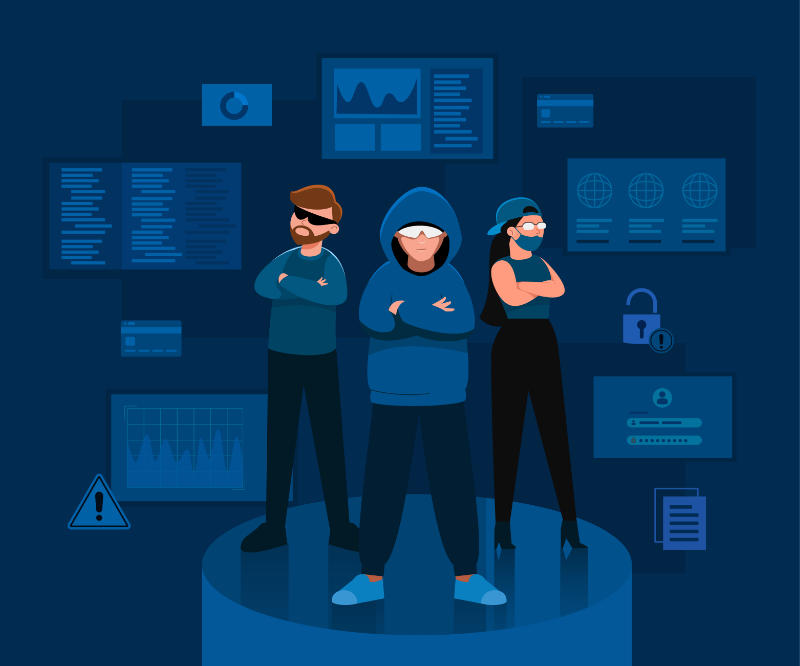 When it comes to cyber security and is on the side of the attackers, we often just think in terms of defense, protection and containment of threats. However, the best approach is one in which you put yourself in the shoes of the attackers and see your infrastructure as the target of your actions. Only in this way is it possible to approach the discussion in a holistic way and not from a single point of view. To carry out this change of mentality, the various actors in the scene are referred to as teams: red team, blue team and purple team. Today we shed some light on the differences between the teams of hackers involved in the action.

Definition of Teams and their purpose

Red Teams are internal or external entities dedicated to testing the effectiveness of a security program by emulating the tools and techniques of probable attackers in the most realistic way possible. The practice is similar, but not identical to Penetration Testing , and involves the pursuit of one or more objectives, usually run as a campaign .

Blue Teams refers to the internal security team that defends against both real attackers and Red Teams. Blue Teams must be distinguished from standard security teams in most organizations, as most security operations teams do not have a constant vigilance mindset against attacks, which is the mission and perspective of a true Blue Team.

The best members of the Blue Team are those who can employ techniques of opposing empathy , ie thinking deeply like the enemy . This mentality is usually dictated mostly by the attack experience.

The Purple Teams exist to ensure and maximize the effectiveness of the other two teams. They do this by integrating the Blue Team’s defensive tactics and controls with the threats and vulnerabilities found by the Red Team in a single action that maximizes both. Ideally, the Purple Team shouldn’t be a team, but rather a permanent dynamic between Red and Blue.

To further explore the points of view, let’s take a closer look at the teams.

Red Teams are often confused with Penetration Testers, but despite having a huge overlap of skills and functions, they are not the same thing. They have a number of attributes that separate them from other offensive security teams. The most important of these are:

1. Emulation of TTP (techniques, tactics and procedures) used by opponents . They use tools similar to the bad guys: exploits, pivot methodologies and typical objectives of a black hat hacker .
2. Tests based on campaigns that run over an extended period of time , for example, several weeks or months of emulating the same attacker.

Penetration testing is when a security team uses standard tools, runs testing for only a week or two, and tries to achieve a standard set of goals. For example, breaking into the internal network, stealing data or obtaining domain administration. A Red Team campaign uses a custom set of TTPs and objectives for an extended period of time.

Of course, you can create a Red Team campaign that uses the best known TTPs, a combination of tools from continuous pentesting , techniques and objectives, and to run it as a campaign.

The goal here is not protection of entrances , but rather the encouragement of curiosity and a proactive mindset. Blue Teams are the proactive advocates of a company from the point of view of cybersecurity.

There are a number of defense-oriented tasks that are not considered worthy for the Blue Team. For example, a level 1 SOC analyst who has no training or interest in offensive techniques, no curiosity about the interface he is looking at, and no creativity in following any potential alarm, is unlikely to be a valid member of a Blue Team.

All Blue Teams are defenders, but not all defenders are part of a Blue Team.

What constitutes a Blue Team member and differentiates him from dealing with defense is the mentality . Here’s how to make the distinction: Blue Teams have and use:

1. A proactive and non-reactive mentality
2. Deep curiosity about things that are out of the ordinary
3. Continuous improvement in detection and response

It’s not about knowing if someone is a self-taught level 1 SOC analyst or a former member of a Red Team. It’s all about curiosity and the desire to constantly improve.

The Purple Team is more of a cooperative mindeset between attackers and defenders working on the same side. As such, should be thought of as a function rather than a separate team.

The real purpose of a Red Team is to find ways to improve the Blue Team, so Purple Teams should not be needed in organizations where the Red Team / Blue Team interaction is healthy and functioning properly.

The best uses of the term Purple Team are where an unfamiliar group with offensive techniques wants to learn how attackers think. It could be an incident response group , a discovery group, a developer group, anything. If the good are trying to learn from white hat hackers , this can be considered a Purple Team exercise.

While Red and Blue Teams have the same goal of improving the security of an organization, too often they are unwilling to share their “secrets” . Attackers sometimes do not disclose the methods used to infiltrate systems, while defense teams do not say how the attacks were detected and blocked.

However, sharing these “secrets” is critical to strengthening the company’s security position. The value of the red and blue teams is nil if they don’t share their research and reporting data . This is where the Purple Team comes in.

Purple Team members make sure their Red and Blue teammates work together and share insights into their resources, relationships and knowledge. To do this, the focus should be on fostering communication and collaboration between the members of the two core teams.

How to use these mind-sets in-company

When outsourcing corporate security with a SOCaaS and running Vulnerability Assessment and Penetration Test , the various teams are completely external. The services that SOD offers are based on best practices for what concerns the work of Red and Blue Teams, generating a Purple Team mentality.

With us, your company’s security is in good hands. Our engineers have experience and are used to working together to achieve maximum results.

Contact us to find out more about how our services can help in corporate defense, we will be happy to answer any questions.